Night on Bald Mountain, Russian Noch na lysoy gore, also called Night on Bare Mountain, orchestral work by the Russian composer Modest Mussorgsky that was completed in June 1867. The work had not been performed in public at the time of the composer’s death in 1881; it was revised by his colleagues and still later by other generations of composers and conductors. Not until it was used in the penultimate scene of the Walt Disney movie Fantasia(1940) did it garner a wider audience. For a Western public, it remains largely associated with that movie and with the celebration of Halloween.

Originally titled Ivanova noch na lysoy gore (St. John’s Night on Bald Mountain), the piece evoked the pagan festivities of the midsummer Slavic holiday associated with the summer solstice, involving fire, water, and fertility rituals as well as the gathering of witches and spirits. The name of St. John became attached to the ancient holiday when the Christian church attempted to appropriate and alter the celebrations. Mussorgsky was inspired by Nikolay Gogol’s short story “St. John’s Eve.”

March to the Scaffold

In the fourth movement Berlioz begins to reveal the truly sinister side of his imagination. The program notes read, "The Artist, knowing beyond all doubt that his love is not returned, poisons himself with opium. The narcotic plunges him into sleep, accompanied by the most horrible visions." The first of those visions is the "March to the Scaffold." In it, the Artist is executed for the murder of his beloved. The march echoes the sound of the real life bands that would accompany the condemned to their execution. The military band escorts the prisoner to the enthusiastic cheers of the strings. In the last instant of his life the Artist thinks of his beloved. Her theme begins but is truncated by the blade of the guillotine. The Artist's head bounces down the steps, the drums roll and the crowds roar.

Italian virtuoso violinist Niccolò Paganini may be the perfect example of nature meets nurture. Taught the violin by his father as a child and tutored by the best teachers, Paganini was considered a prodigy. The ferocity with which he played , coupled with his elongated fingers and extraordinary flexibility, gave him a mysterious, almost mythical reputation. Mobbed in the street and rumored to have a deal with the devil to achieve the heights of his virtuoso performances, he ultimately became considered the greatest violinist of all time.

Marfan syndrome is a genetic disorder changes a person’s connective tissue, often making them unusually tall with lengthened limbs and long, thin fingers. Observers of Paganini frequently commented on his unique hands. In 1931, his personal physician wrote, “Paganini’s hand is not larger than normal; but because all its parts are so stretchable, it can double its reach. For example, without changing the position of the hand, he is able to bend the first joints of the left fingers –which touch the strings–sideways, at a right angle to the natural motion of the joint, and he can do it with effortless ease, assurance, and speed. Essentially, Paganini’s art is based on physical endowment, increased and developed by ceaseless practicing.” 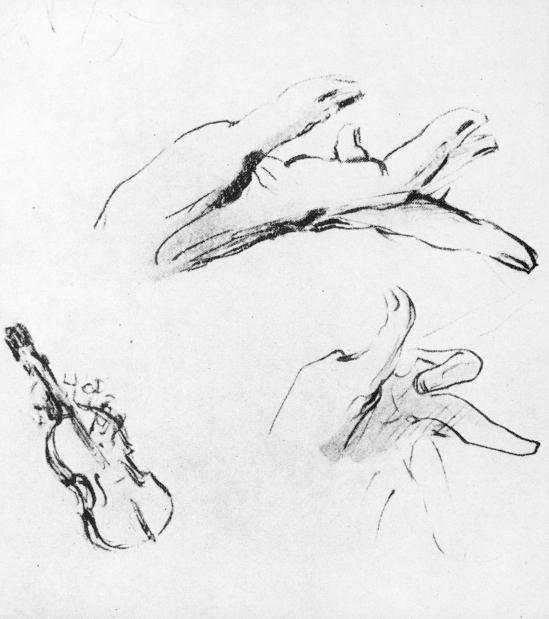